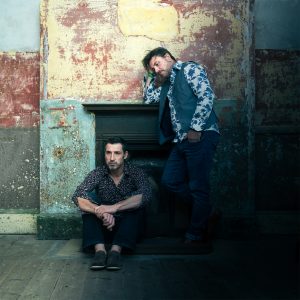 Performing on stage with passion and intellect, the Broadside Boys entertain with songs of tragedy and heroism, of plane crashes and ship wrecks, sailors and steam trains, of merchant seaman on the Arctic convoys, of hedge preaching wheel wrights and of game keepers and one-armed headmasters!

Eric and Mat were raised barely three miles apart in small villages near the coast in rural Suffolk. School friends, then team mates at the local football club, their bond has defined their musical partnership. The shared experience of growing up together and their long standing friendship is much evident onstage, and in their musical collaboration.

Formed In 2011, the journey so far has taken the band from Suffolk Alehouses to the biggest stages in the Folk World, With performances at Folk East, Cambridge Folk Festival, Ely Folk festival, appearances on Radio and TV, and at venues, clubs, pubs and festivals across the UK.